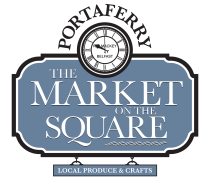 The Market on the Square

We are a husband and wife team of artisan bakers who believe home baked tastes best. We use all local ingredients and believe you get out what you put in. Our sausage rolls have amassed a huge following and we are known for great quality and great prices.

Donald lives in Portaferry with his wife, Heather and works from his studio on Mountain Road.

Donald produces hand thrown domestic pottery in Terracotta, mugs, jugs and bowls and recently a range of lamps based on pebbles from the beach. Heather makes a range of locally inspired cards and ceramic jewellery. See the collection on our website.

We are multi award winning artisan producers of French patisserie, breads, quiches, pies, traybakes & muffins. Our family run cafe/deli is based just outside Downpatrick and I am the chef/owner. I am a French born & trained pastry chef and have been living & working here for 28 years.

All products are hand made on our premises using high quality local ingredients. We supply wholesale to a few shops & take part in farmers markets up & down the country. We also make gateaux for special occasions & offer outside catering.

We have also just won a new award from the Ulster Grocer Magazine for best artisan food campaign.

We are delighted to be taking part in the new market in Portaferry.

Award winning spirits crafted in the heart of the Ards Peninsula

The Echlinville Distillery became the first newly licensed distillery in Northern Ireland for over 125 years when it began production in 2013. It has since established itself at the forefront of Ireland’s spirits renaissance and is home to some of the north’s best-known spirits including the iconic Dunville’s Irish Whiskey, Echlinville Gin (winner of the coveted Three Star rating at the Great Taste Awards), Jawbox Gin and Bán Poitín.

A ‘field to glass’ farm distillery, Echlinville’s new-make spirits are distilled from barley grown and harvested from their own fields and floor malted on their distillery farm. Their story is one of provenance, pride in their roots in the Ards Peninsula and devotion to the ancient art of distilling.

The Market on the Square will be held in St. Patrick’s Community Centre, Steele Dickson Avenue on the first Sat of each month October – December 2022.